A radiator every minute 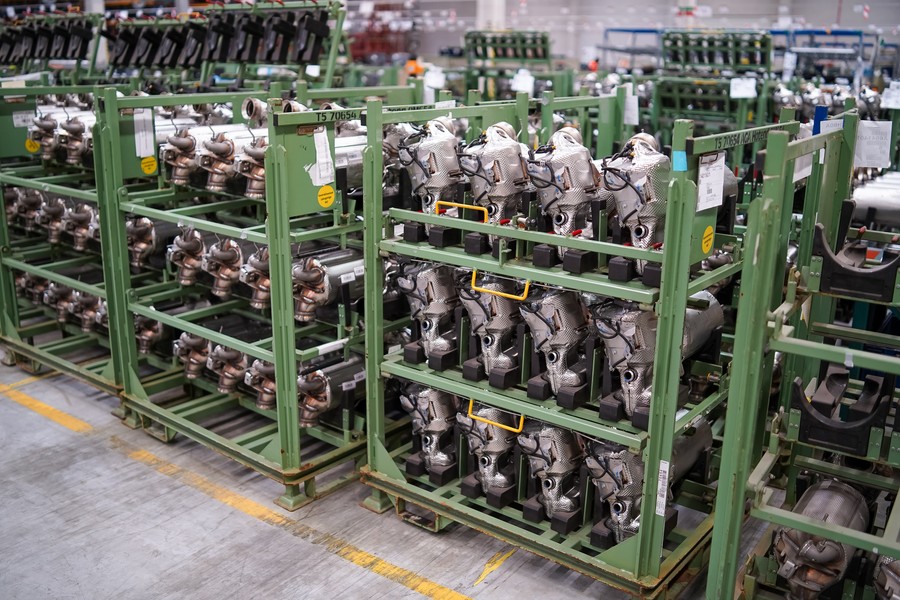 At Schnellecke in Bremen, we ensure that parts and modules are installed at the right time on the assembly line of the customer.

The customer's plant in the Sebaldsbrück district of Bremen has produced a total of more than eight million vehicles since 1978, averaging more than 400,000 vehicles per year in recent years. By the end of the decade, vehicles "Made in Bremen" will cover the entire spectrum of intelligent powertrains – from classic combustion engines and plug-in hybrids, to fuel cell and electric vehicles.

In 2017, the plant received the Automotive Lean Production Award and the Industrial Excellence Award (Start-up category) for its
series production and innovative approaches. A total of 1,000 suppliers supply the plant to ensure that everything runs smoothly. Their products are transported to the plant by 1,000 trucks every day – many of them take a short detour via the Schnellecke Bremen site. 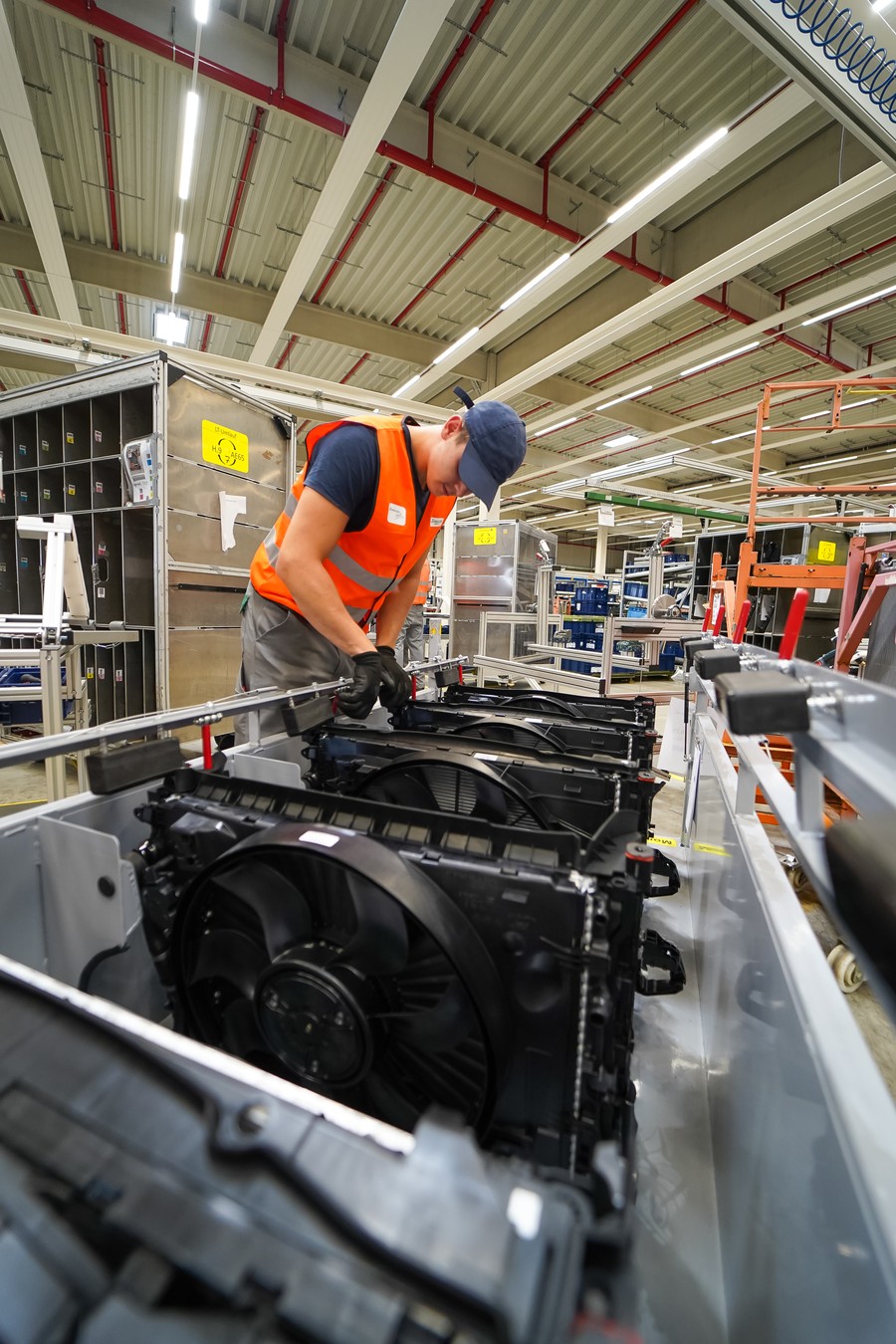 We are welcomed in Bremen by two old acquaintances: Christian Löschen, managing
director of Schnellecke Modul GmbH (SMG), whom we previously got to know as the site manager in Soltau, and Carla Osteroth, who was head of administrative management in
Soltau. She is now the administrative manager of SMG and Löschen’s right hand. Both have been in Bremen right from the very beginning and experienced the somewhat bumpy early months. “Even if you’ve done this a dozen times before, the startup of a new site always has its challenges,” Löschen says, looking back on the early days just after SOP (start of production).

When Löschen and Osteroth accompany us into the over 26,000 square meter halls, there isn’t much evidence of it. The work runs like clockwork everywhere. Around 270
employees sequence and assemble in three shifts.

We stop at one of the stations where radiators are assembled. “In total, there are 42 different radiator variants,” says Löschen. “At this customer, one vehicle leaves the
assembly line every minute. For us, this means producing a suitable radiator every minute. Errors must not happen, because every vehicle is different and is fitted with its own individual radiator.”

The parts required for assembly are pre-sequenced by Schnellecke. The next sequencing trolleys are already waiting behind the assembly station. We move on so as not to interrupt the high pace kept here. 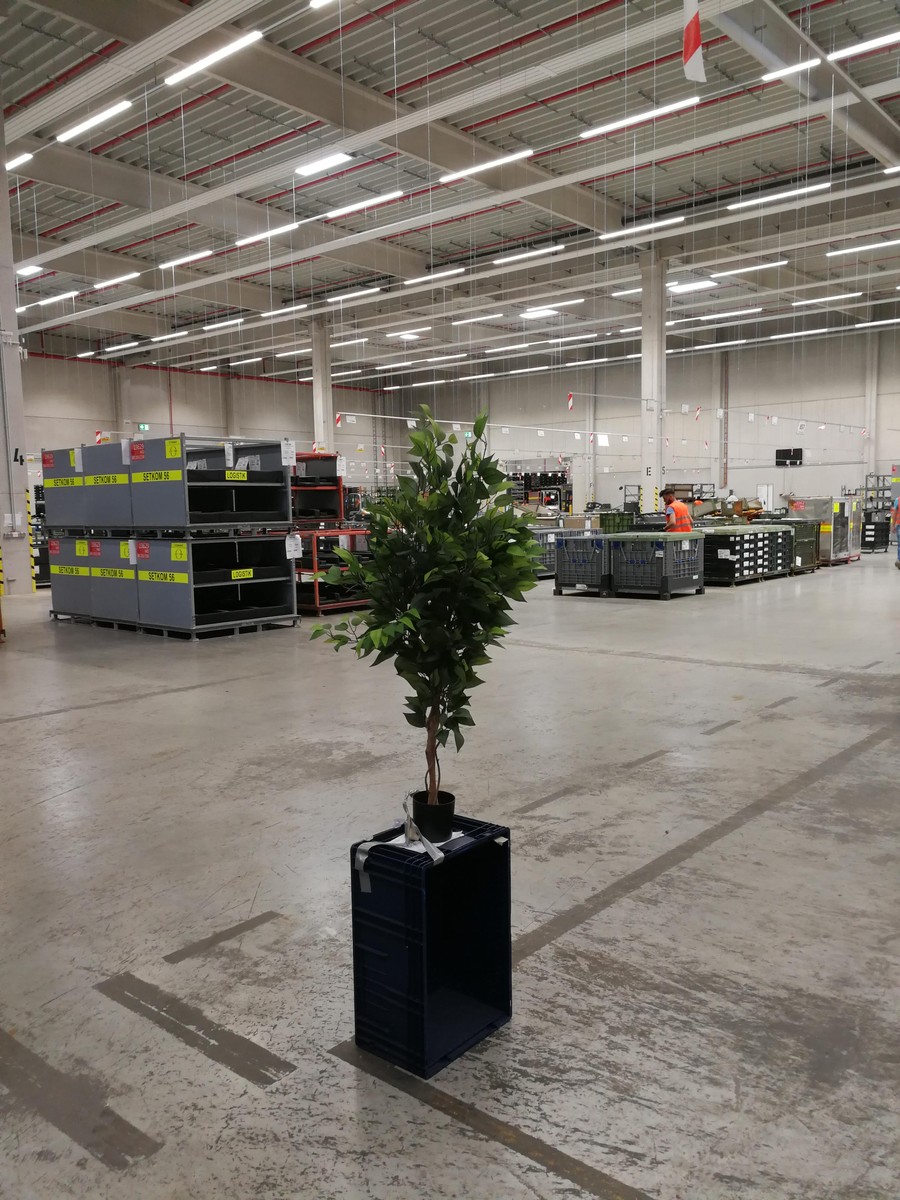 In the next hall we meet Tatjana first. The forklifts flash by to the right and left, but Tatjana sits in the middle without batting an eye. She can’t either, because she’s a plant.
Löschen points upwards: “The forklift truck drivers constantly hit the bar hanging from the ceiling with their loads. So we simply put a plant under it. Now everyone goes around
it and the problem is solved.”

Incoming goods is located at the end of the hall. Around thirty trucks bring about 1,500 handling units every day directly from the suppliers, from intermediate warehouses, or from an automated small parts warehouse. After unloading, the items are distributed: A portion goes directly to the line, another to the high-bay warehouse, and a third to the block warehouse.

Again and again we have to dodge the numerous forklift trucks at work here. “We have exhaust systems, batteries, gaskets, air conditioning units, radiator modules, equipment carrier plates, cover plates and more,” explains Osteroth. “Some of them we sequence, others we pre-sequence and assemble into modules.”

Two production halls of the customer in which a total of 1,500 vehicles are produced per day are supplied by Schnellecke. Everything has to run like clockwork, especially the replenishment.
“We have a buffer for twelve hours of production,” says Osteroth. “Fortunately, the automated small parts warehouse and other warehouses are very close by; if things get tight, we can get the parts we need there in the shortest possible time.”

We hear the sound of the forklift trucks honking their horns through the hall as we walk past the numerous workstations in the
direction of the outgoing goods area. To our right, batteries are being sequenced after they have been fitted with terminal caps. On our left, foam parts are being stacked in grid boxes. Behind them, equipment carrier plates are being fitted individually, each
with different parts. At another station, five large laser printers hum along.

“Here we assemble car sets to form kitting bins,” explains Osteroth. “We recently took over this complex set. Each car set consists of small load carriers as sub-kitting bins. This is the most complex set I know. This is also because the parts in the bins must always be in a precisely defined position so that the worker does not lose time searching around on the conveyor.”

The task is correspondingly prone to errors. The correct composition is still checked by visual inspections and photo documentation. The plan is to automate the process. Then the sub-kitting bins will be pushed through camera-equipped gates, which will facilitate a quick check. 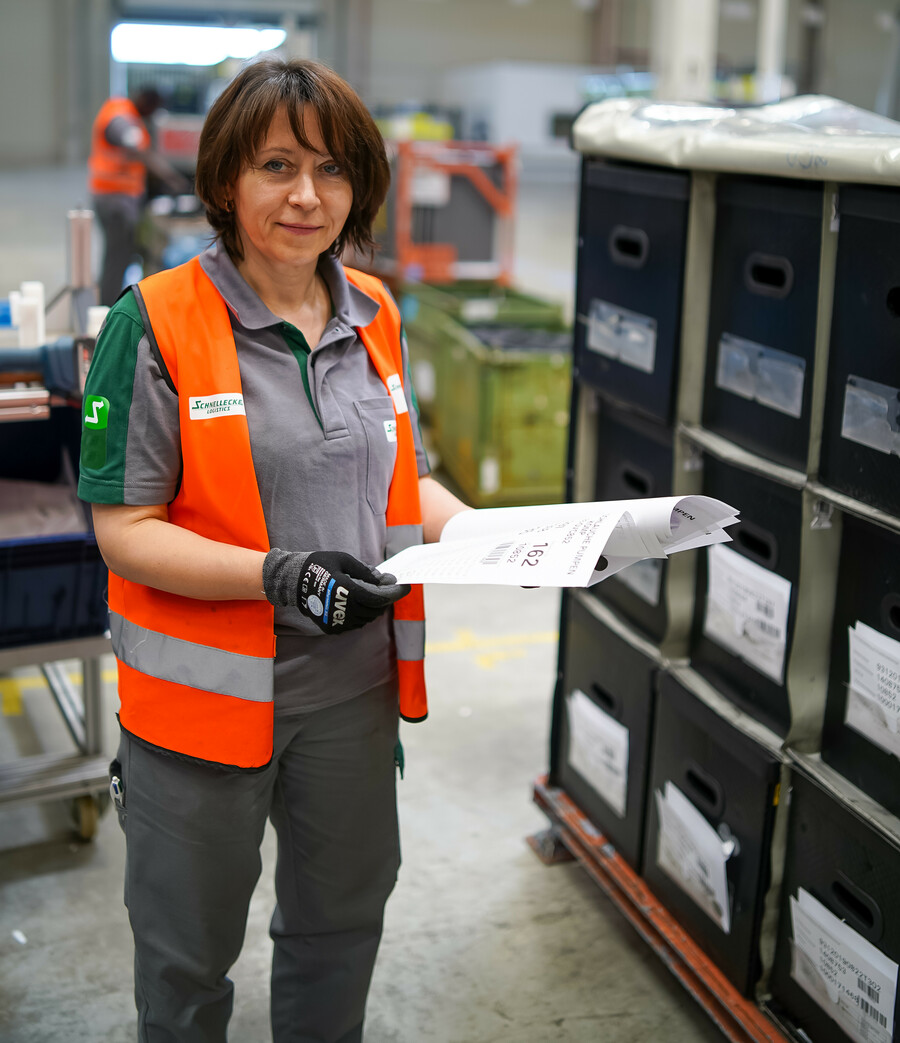 Each car set comes with extensive documentation, which can include up to eleven sheets. These documents, which are sorted
by an employee for each set, are output by the printers. The printers themselves are managed by the customer.

The finished sets await collection in the outgoing goods area. Two loaders make sure that they are loaded correctly, because the trucks have an assembly side and a logistics side. The employees here know exactly how many sets have to leave the hall at which time. Everything is calculated exactly so that the customer's assembly line does not stand still and the buffers do not overflow.

Schnellecke has been working for this customer not only in its own building since the end of 2019, but also with 150 employees
directly in the factory. Here, too, it is ensured that all the required parts arrive at the assembly line at the precise time.