A visit to the Schnellecke CKD centers.

It sounds so simple: Package and ship auto parts. But if it really were that easy then the numerous suppliers could just send their components directly to their destination instead of to one of Schnellecke’s CKD centers. What does CKD mean? And what is so special about this practice? We visited the Schnellecke CKD centers in Cologne and Duisburg to find the answers to these questions.

The Cologne Eifeltor Cargo Center is Germany’s largest container transhipment station for the combined rail & road freight transport. The
giant portal cranes are in operation day and night and flood the site in a bright light even at night.

Numerous companies and logistics service providers have settled in the area, and the influx continues unabatedly. Since 2016, Schnellecke has its CKD site in one of the new logistics parks too. Engine assembly kits for the customer are picked, packaged, and made ready for shipment here.

CKD is the acronym for Completely Knocked Down and describes the extensive disassembly of a vehicle or engine into its individual components and functional units. The process is an indispensable part of modern vehicle production.

It is not vehicles at the customer in Cologne but engines that Schnellecke prepares for shipment around the world. Furthermore, so-called EATs are picked and packed according to orders.

EAT stands for the Exhaust After- Treatment system of diesel engines. Lawmakers continue to stipulate increasingly lower particle limit levels. In order to comply with these, the use of a diesel particle filter is indispensable. Furthermore, depending on the engine, other
systems are used, such as a diesel oxidation catalyst or selective catalytic reduction. These advanced systems have to be both compact and individually adaptable to the client device.

The manufacturer offers both with its EAT systems. Schnellecke creates an EAT package for every engine, which is then sent together with the engine. As well as the particle filter and the catalysts, the contents of the EAT accessories pack can also include the most varied small parts, hoses, control units, or dosing units for the AdBlue tanks. 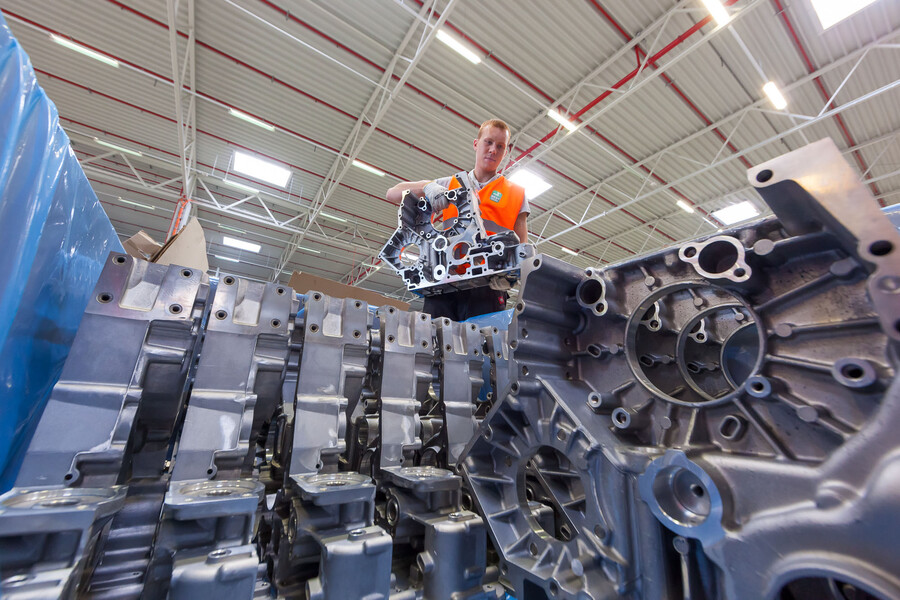 The CKD engine assembly kits are packaged and loaded in individual parts. They are subsequently transported to various sea ports and airports in Europe. From there they are shipped to clients and joint ventures, among others in China, South America, or northern Africa where they will be assembled. This includes, for example, cylinder heads, crankcases, crankshafts, camshafts, oil pans, but also small parts such as screws, discs, and sealing rings that have to be packaged individually.

The workplaces in the large hall are as different as the individual components. Small parts are packaged in plastic covers, large and heavy components are packaged in appropriately sized transport boxes. Cartons are filled with parts on another line. All of this takes place virtually automatically. Each employee knows what they have to do and does the work at a brisk tempo but without any noticeable rush. This is only possible because all processes were meticulously planned beforehand. Only in this way can the arrival of boxes with all parts that belong together at their correct destination be ensured.

Forklifts take replenishment to the lines from the high-bay warehouse or pick up the packed boxes and pallets. These are lined up at the doors ready to be picked up by the freight forwarder, who takes them to their next destination on behalf of the customer.

We leave Cologne and head down the Rhine River a few dozen kilometres. Logport II south of Duisburg is a relatively young offshoot of the Duisburger Hafen AG. Several buildings – among them a Schnellecke CKD center – were built in a very short time in the shadow of a closed down disposal site on which Duisburg’s latest landmark, Tiger & Turtle, rises into the sky.

Car parts for various models of the customer are prepared for sea transport to China, India, and Mexico. Schnellecke employees receive,
warehouse, pick and package the components in special CKD bins and load them into overseas containers. The worldwide largest customer's site covers a total of around 53,000 square meters of building space on the 106,500 square meter premises. That is about
the size of eight football pitches. When running at full operation, 450 people work here.

4,000 individual parts for one vehicle

As well as avoiding high import duties, the optimisation of the assembly process at the final destination also plays a role. Schnellecke collects the components here that come from the car manufacturers themselves and from many suppliers. We put the JIT components together in such a way that in each case two containers contain all parts that are necessary for the assembly of a complete vehicle. That speeds up the work at the destination considerably.

For one vehicle, up to 4,000 individual parts have to be properly compiled and packaged in as space-saving a way as possible. This is not possible without an ultra-modern IT in the background. That is why the employees are equipped with barcode scanners, tablets, and
touchscreen computers with whose help they can find the right components quickly and without errors.

Work in a modern CKD center is characterised by drastic workload fluctuations. This leads to noticeable fluctuations in the number of employees. This is why Schnellecke has developed special qualification concepts. Employees in key roles who are always present are already trained many weeks before the start-up of a new packaging operation. On the other hand, employees who are deployed at short notice to compensate for workload fluctuations have to be qualified in a very short time. 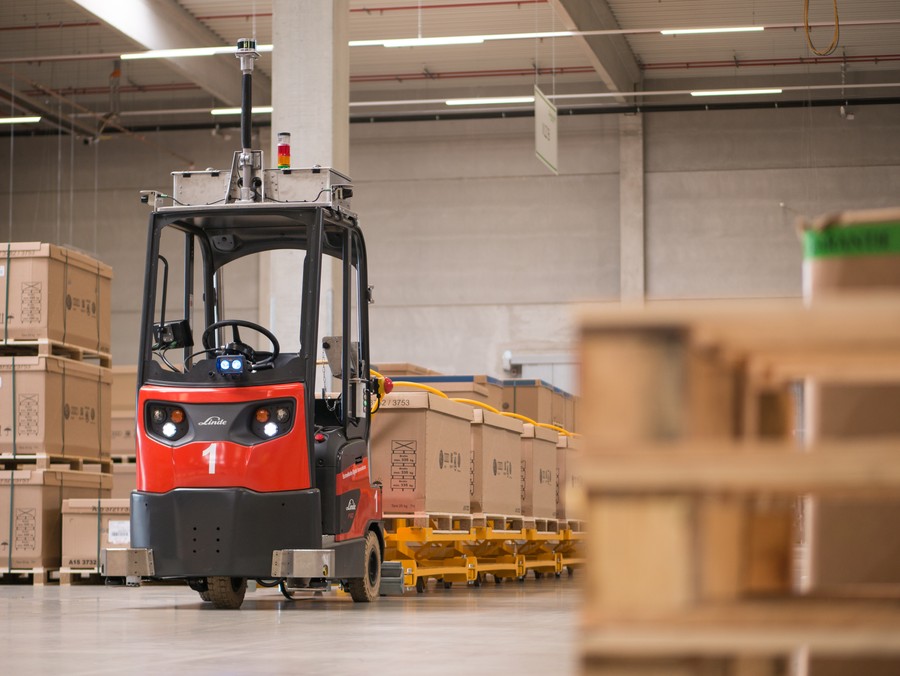 Employees riding pedal-scooters dart between the rows of shelves and the noiseless tugger trains in the enormous, almost 500 meter long halls. The tuggers are electric with several trailers
and appear to randomly drive this way and that – and yet each movement follows an exact and sophisticated plan. It is immediately obvious that every tugger is equipped with a remote control. It used to be necessary to have an extra staff member for instructions in order to position the trolleys precisely in front of the conveyor belts for loading, but this can now be done just by the driver.

When a tugger train is fully loaded, a standard battery-powered bicycle light attached to the first trolley is switched on – an innovation developed at the Duisburg CKD center. The tugger driver can tell by the blinking light that the trolleys are ready to be picked up.

The small part packing places are also innovative. For example, scissor lift tables are hydraulically raised to the desired height by operating a foot pedal. By using a bracket the upper platform can be tilted forward for better access to the goods that are further to the back of the load carrier.

All of this not only supports the smooth flow of the processes but also lightens the load on the employees. Because Schnellecke is convinced: High productivity and ergonomics are not contradictory but complement each other.

In Other Countries as Well

Schnellecke does not only perform CKD services for its customers in Germany but also in Spain and India. Every year Schnellecke packages more than a million cubic metres of parts in total at its CKD sites worldwide. 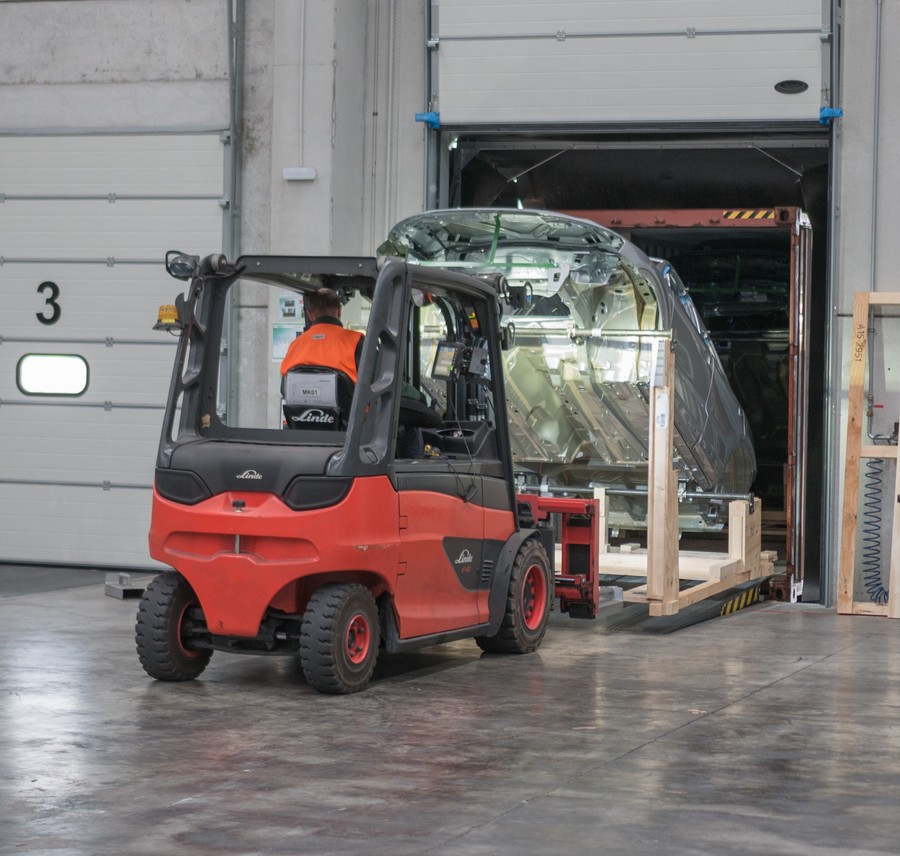 The term Completely Knocked Down (CKD) has its origin in the automotive industry and refers to a special form of vehicle manufacturing and marketing. It is by no means the case that completely manufactured cars are entirely disassembled and then
subsequently packaged for shipment to overseas, but rather a vehicle that has not been completely manufactured is sent in the form of individual parts and modules to the respective assembly plant (usually overseas), where it is assembled to a complete
vehicle.

Generally, the manufacturers and suppliers deliver the parts and modules to a packing company. Here they are packaged for transport, consolidated in accordance with their order, and loaded onto trucks or into sea containers for the scheduled transport to the assembly plant.

CKD logistics includes the packaging planning according to the customer and suppliers’ requirements, the interim storage of prepacked and non-prepacked car parts, and the picking and packing of the individual orders in accordance with the programme, as well as the scheduling of the complete packaging materials. Container handling and empties management are also key elements of the CKD business.

The Ford Motor Company was already delivering its vehicles in individual parts to other countries where they were then assembled to a complete vehicle in 1922. The reasons for this have stayed the same until today: Many countries level a duty on the import of vehicles. Duties for partially or completely disassembled end products are often considerably less. By assembling the parts in the destination
country, the vehicle can then be sold for less money and is therefore more competitive on the market.

Vehicles are also delivered in individual parts at the start of local production in another country. This means that the investments in the new market by the manufacturer remain manageable since complicated components are imported. The remaining components are produced in the importing country or sourced, meaning a part of the value added is generated there ("local content").