The simple thing that is hard to do

A visit to the Multi-JIS-Center in Düsseldorf.

Düsseldorf – you immediately think of the old town and the banks of the Rhine, of Altbier and carnival. But the inhabitants of Düsseldorf can not only celebrate well, they can also work well. For example, at the customer’s transporter plant, which has been located in the city on the Rhine since 1962.

More than 65 percent of all vehicles produced worldwide come
from Düsseldorf; more than 2.5 million of them have been produced here since 1995. This currently amounts to around
150,000 vehicles per year produced on almost 700,000 square meters of factory space. And soon an electric drive transporter will also come off the production line in Düsseldorf. 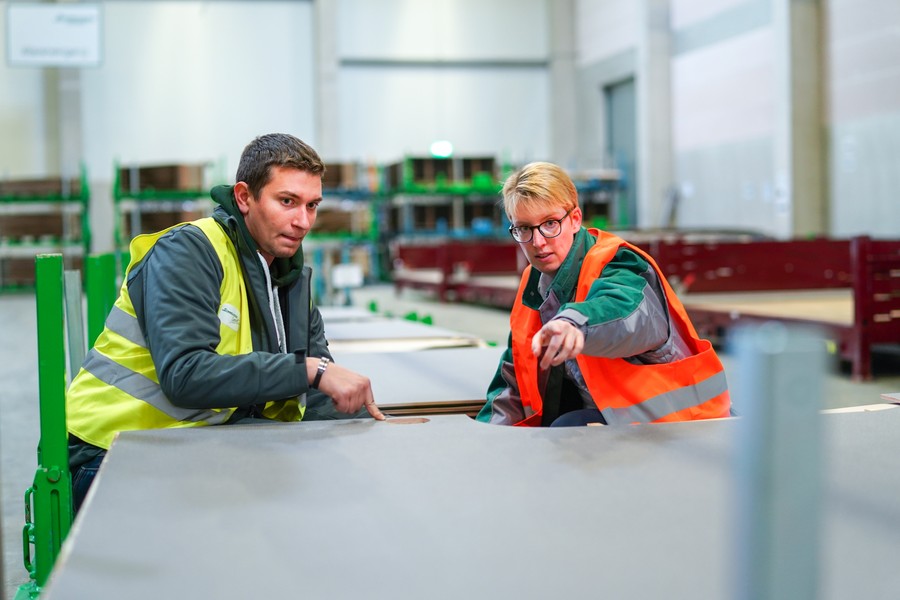 Call for tenders from the suppliers

The customer relies on numerous external partners to ensure that this huge production operation runs smoothly. “With the Düsseldorf site, Schnellecke has taken the long-awaited step into
the world of this customer,” site manager Judith van Briel is happy to say. This was helped by the suppliers who awarded the sequencing to Schnellecke after a tender process. The suppliers of the cardan shafts joined the team shortly before the start of production.

A total of seven suppliers now have their modules sequenced by Schnellecke for the vehicle model, which has been built since 2018. Exterior mirrors, headlights, steering wheels, loading floors, and cardan shafts are now delivered just in sequence (JIS) directly from Schnellecke to the Düsseldorf-Derendorf assembly line.

We arrive at the Schnellecke site in the district of Heerdt, an address probably familiar to every artist in Düsseldorf: right across the street from the industrial park is the city’s largest artists’ supply store, with everything from small erasers to large canvases for the visual arts.

The other side of the street, where Judith van Briel and Junior Planner Marcel Bakker welcome us, is a bit more plain. First we go into the hall, where employees from different nations put together the next delivery. “The communication here often works better in
English than in German,” explains van Briel.

“After the start we had a very humane start-up curve,” recalls van Briel. “In the beginning only about twenty cars a day were built in one shift. That was good for us because we had to struggle with our own start-up difficulties.”

The building originally rented by Schnellecke on the other side of the Rhine was exactly tailored to the planned tasks. But then, almost at the last minute, the supplier of the cardan shafts came on board because their logistics partner had dropped out. “So we had to move to a larger building,” says van Briel. “However, this was only possible at the beginning of February, just under a month before the beginning of the start-up phase. And there was nothing in this building: no shelves and no IT. So the start of the run-up phase was already a bit bumpy.”

Fortunately, this first phase was assessed by the customer as a start-up problem. “We have a very cooperative relationship and meet once a week,” explains Bakker, who joined the founding team around Judith van Briel and Quality Manager Kiril Hadzijew in November 2018 after completing his traineeship as Junior Planner. “We have agreed with our customers that we will act as their mouthpiece, even if we do not have a contract with the customer ourselves.”

Bakker points out that the sequencing of headlights and exterior mirrors is basically unproblematic. “Two of these are needed per vehicle,
that's easy. The steering wheel is not a problem either”. The loading floors, on the other hand, are tricky because there are over 400 different variants, of which around 60 to 80 are called up each week. “We have a 150-minute turnaround time for this, from which, depending on the traffic situation, about 20 to 40 minutes can be spent driving to the customer's plant about seven kilometers away,” says Bakker. “Due to the fixed cycle time and the short turnaround time caused by the early installation point of the loading floor, we can never sequence in advance and create a buffer here.”

Bakker's conclusion: “With a project like this, we always learn something new.” By the time we left after a final tour, we had also learned a lot. For example, even in a seemingly simple project there can be many pitfalls lurking, and the devil really is in the details.

The suppliers unload their goods, quickly repack them, and deliver them to the assembly line – it sounds easy enough that anyone could do it. Our visit to Düsseldorf showed us how right Bertolt Brecht was when he said, “It is the simple thing that is difficult to do.”